I had an anxiety trying it first time. Surely, you’ll have the same thought if you already conceive the taste of fish. I am a Bengali and we are eating fish daily. But that was first time I had RAW fish. A big bowl of colorful RAW fish was served on ice with soy sauce for dipping, wasabi paste and gari. I was surprised because the bowl did not smell like fish that we usually get in our local market. It was edible to me on first look.
Approx ¼ inch thick fish block is very soft and bit oily. My first bite was challenging because I had to adopt the taste. Usually sashimi ingredients are seafood contains high protein and lower fat. Chopsticks are most appropriate utensils for sushi and sashimi. I was lucky because I already knew how to use it.
One cannot keep on eating because of the oily texture and unusual flavor of the fish. As a complimentary we had, Sake a Japanese alcoholic beverage, to clean our palate after each bite. Sake is served hot as the sushi is served cold.
Uni or Sea urchin is one of my favorite seafood. In fact my first sushi entrée ends with uni.

If you are based out of New York then please visit Haiku sushi bar at White Plains. 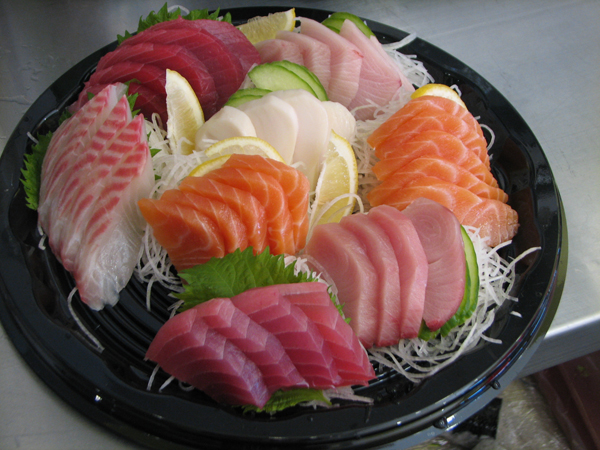 This photo is courtesy of TripAdvisor

Sushi
It is also a Japanese food contains cooked rice. It is prepared with raw fish (sashimi) mostly. 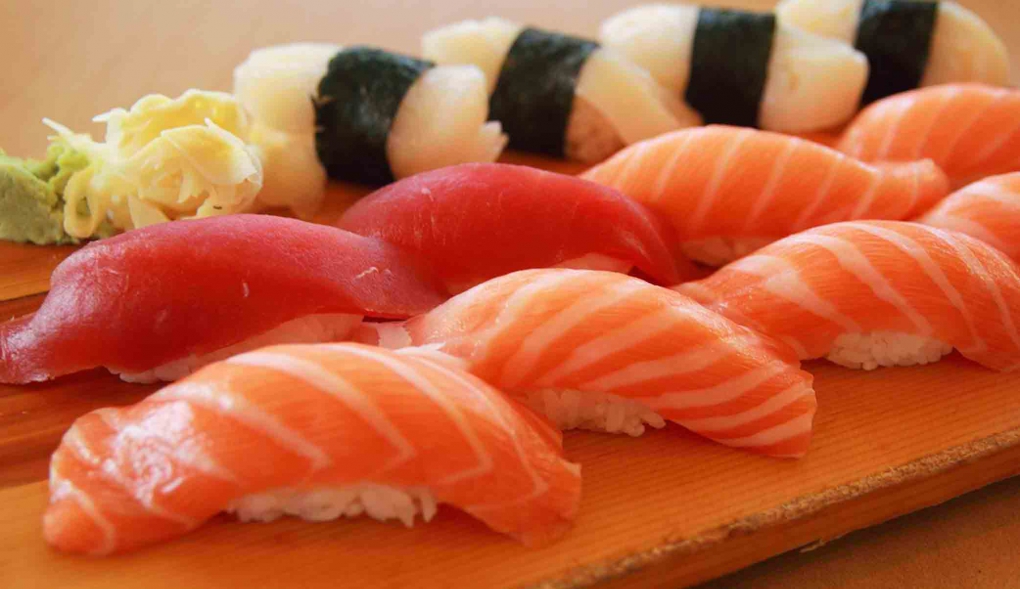 This photo is courtesy of youmesushi.com

Sushi is served with soy sauce, wasabi and gari. Soy sauce is served for dipping and seasoning. Wasabi is a Japanese horseradish. Wasabi has a very high pungency. It has a very strong aroma similar to mustard seeds and a pinch of wasabi is really alarming. Gari is a ginger processed in vinegar and sugar. 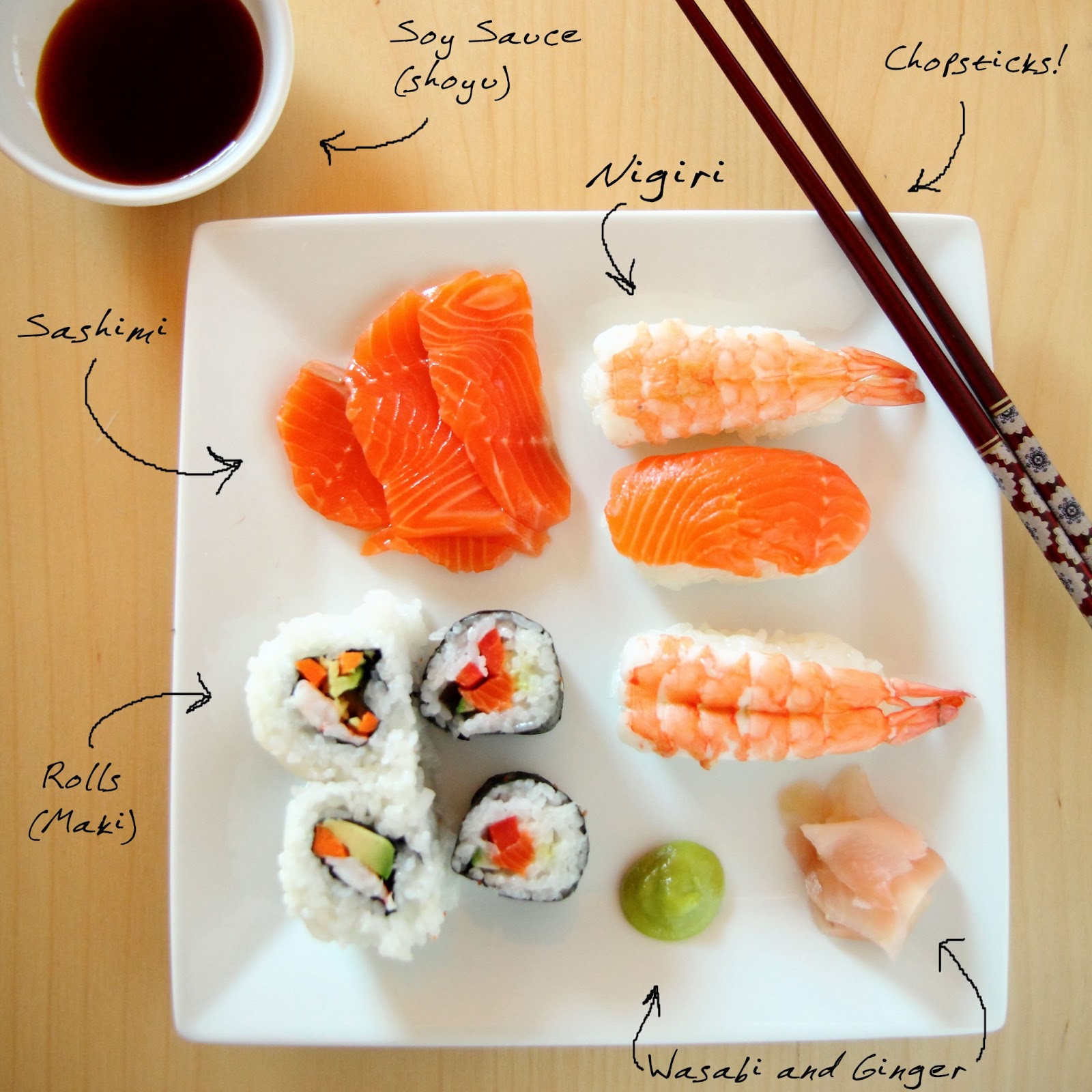 This photo is courtesy of willcookforfriends.com

Take a pinch of wasabi, very little and spread across the surface of a fish block of approx an inch wide. Then put one ginger on top of it. Hold the fish block gently and dip it into the soy sauce and eat the whole block.

You can also take the wasabi and mix with soy sauce first. Then place one gari on top of the fish. Dip the fish in soy and have it.

If you wish to start with an appetizer then you must try Miso soup. Miso is made of dried fish stock and tofu (bean curd). Tofu has a subtle flavor and can be used in savory and sweet dishes. You can have the soup with rice as well. 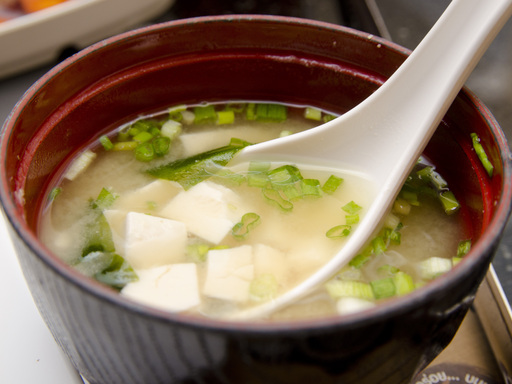 This photo is courtesy of wellnesstoday.com 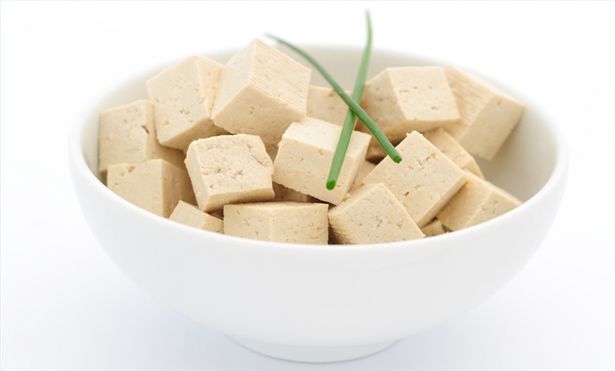 This photo is courtesy of lovefood.com

Since sushi is served cold, the ideal complementary drink is hot Sake. It is a Japanese alcoholic drink made of rice. Sake is traditionally served in ceramic flasks called Tokkuri. Choko are small cups used to drink the sake. 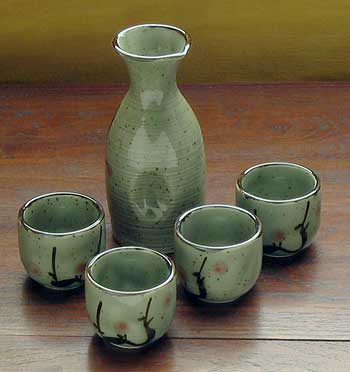 This photo is courtesy of pinterest.com

Can you risk your life for the delicacy?

Fugu is a delicacy which only licensed chefs are allowed to prepare in Japan. Fugu contains lethal amounts of the poison tetrodotoxin in its organs, especially the liver, the ovaries, and the eyes, whereas skin is usually non-poisonous. The poison, a sodium channel blocker, paralyzes the muscles while the victim stays fully conscious. Fugu poison is 1200 times stronger than cyanide and there is no known antidote. The standard treatment is to support the respiratory and circulatory systems until the poison is metabolized and excreted by the victim's body.

An approximately three year apprenticeship is required before a chef is allowed to take the examination to ensure they have the proper skills to prepare the dish safely. Most of the applicants fail their examination, which is quite complicated; however this ensures that only the most skilled and knowledgeable of applicants become certified for the task. The dish is somewhat expensive, with servings in the range of US$20 to US$50 and a full course meal costing up to US$200. Due to the specialty nature of the dish, a chef is careful to prepare the fish gathering the most meat possible, and a special knife called a fugu hiki is employed for the task. The fish is usually served as sashimi, called fugu sashi, or tessa, and is sliced thinly and placed so that the pattern of the plate is visible through the fish. The organs are sometimes available as fugu no shirako, however they are specially treated to remove the toxins and are not commonly available. 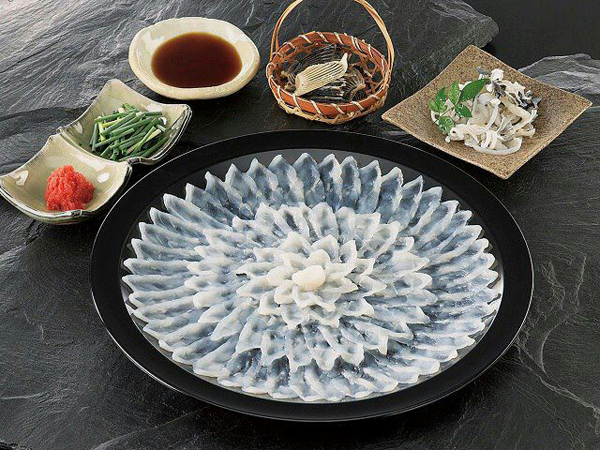 This photo is courtesy of traveleatfun.com