Allopatric speciation is the type of speciation that occurs when the biological populations of a same species separated from each other to the point that helps to prevents any type of genetic interchange. This type of separation is also known as Vicariance (A process which help the geographical range of an individual species, is divided into gap parts by the occurs of a geographic changes or Human activity). Allopatric and Allopatry, both are the part of the biogeography, which are mainly used for the individual animal or plant whose ranges are properly separate and they never mixed up in any common place together. If these individual living organisms are mostly related to each other, then the cause of this type of distribution is usually allopatric speciation.

When the allopatric speciation involves this can be the result of population dispersal leading to emigration and the geographic changes or emigration can be the result of such as shifting places of continents, and the sudden arise of mountains, separate land, islands, water bodies, and glaciers or because of the large scale human activity such as example agriculture or civil developments can also change the distribution of species populations.

The vicariant populations then undergo genotypic or phenotypic divergence as,
a) They become subjected to different selective pressures
b) They independently undergo genetic drift
c) Different mutations arise in the populations gene pools.

In the western United States, the Death Valley region (Approximately 50,000 years ago) had an interconnecting system of freshwater rivers and lakes because of the rainy climate. After the last 10,000 years that place stayed in a drying trend because of the Climate change, as the lakes and rivers shrank, fish populations became geologically isolated and also gave a great effect at plants.

In some cases the geological barrier can make a effect in a population correlates the mobility of the organism or the offspring, for example physical barriers such as canyons(a deep gorge, typically one with a river flowing through it , as found in North America.) may actively block migration and dispersal of small animals,but however may have little impact on flying birds or wind-borrow seeds. 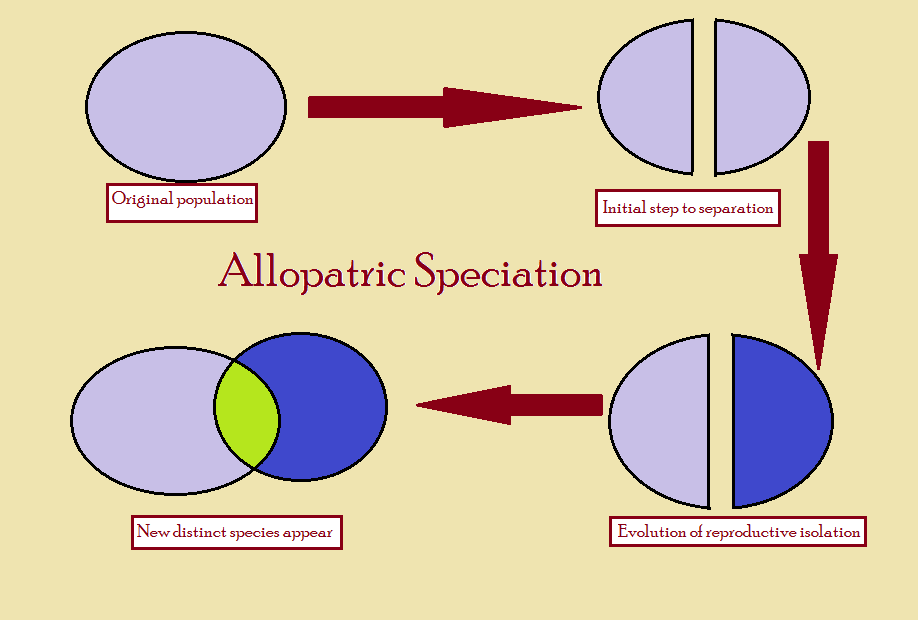 The population which are separated may develop gradually completely different characteristics over time. If any case the geographical barriers are disappeared latter, then the members of two populations may be cannot met with each other successfully, at which point, the genetically isolated groups have developed in a different species. Allopatric isolation plays an important key factor role in speciation and it is a common process by which new species arise. In Charles Darwin observation of as adaptive radiation in Galapages finches, is a consequence of allopatric speciation among island populations. On a global scale, plate tectonics are major geological factors leading to separation of populations and the resulting distribution of species.