What is Integument? / Integument definition. For Insect.

The physiology of growth in insects is so profoundly influenced by the properties of their integument- it becomes a very interesting characteristic part of insects' bodies. It consists of a single layer of epidermal cells which is present on the surface of the animal and it gives rise to a number of important components like the buccal cavity and foregut, the trachea, the lower genital ducts and the multifarious glands that upon the surface.

(A) Epidermis:- The epidermis is seen in it’s full development, only when the new cuticle is being laid down apical part of the epidermal cell is striated with extensions into the vertical filaments(pore canals) of the cuticle. Differentiation from the epidermis are the dermal glands which send fine ducts through the cuticle and the oenocytes which may remain applied to its lower surface. The epidermis rests upon a basement membrane probably formed from the condensed processes of epidermal cells with haemocytes adherent to its lower surface and contributing to its substance.

(C) Epicuticle:- It is a complex structure made up of several layers. Histologically, it is sometimes possible to recognize at least three layers.

The endocuticle is usually made up of obvious horizontal lamellae. They represent the layers of cuticles deposited on successive days. Rigidly in the cuticle is commonly supplied by the hardness of the exocuticle. Sometimes the cuticle is modified to form cuticular spines, each attached to the margins of a socket by a thin flexible membrane. The exo and endocuticle are transversed by numerous vertical lines called ‘pore canals’ by leydig(1855) and were regarded by him as filamentous processes of cytoplasm from the epidermal cells, around which the non-living substance of the cuticle was secreted.

The integument, the outer surface, is the product of a single layer of ectodermal epithelium. That layer is connected to the external part of the inner layer, the non-cellular internal membrane of the integument, basement membrane. The layer of epithelium on the basement membrane produces the cuticle, whose most important component is chitin. Chitin plays the major important part in integument where flexibility is necessary, such as in bodily parts that must stretch to contain accumulated liquids, or that form joints between rigid parts of the exoskeleton.

The physiochemical nature of the chitin:-

The best known constituent of the cuticle is the nitrogenous polysaccharide, named chitin. Chitin has the empirical formula (C8H13O5N)n . But sometimes chitin is described as cellulose with one hydroxyl group on each monomer replaced with an acetyl amine group. Which actually creates the increased hydrogen bonding between adjacent polymers, as the chitin-polymer matrix increased strength.

Chitin is insoluble in water, alcohol, ether and other organic solvents, dilute acids, dilute and concentrated alkalis. The mode of synthesis of chitin is not fully known but there is evidence that uridine diphosphate N-acetyl-glucosamine. 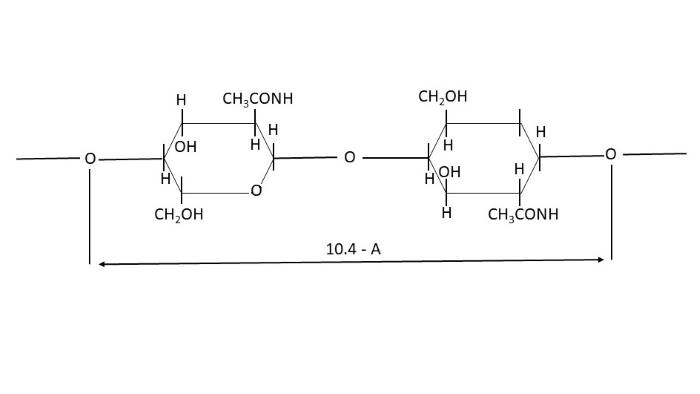 Chitin is usually the main constituent of the endocuticle of which it forms about 60 percent of the dry weight in periplaneta. It is present also in the exocuticle to the extent of 22 percent in periplaneta, but it is completely absent from the epicuticle.