Resact is a peptide of sequence isolated from the jelly layer of Arbacia punctulata (sea urchin) eggs, is a potent chemoattractant for A. Punctulata’s spermatozoa. The concentration dependent chemotactic response is abolished by pretreatment of the spermatozoa with resact, and shows an absolute requirement for millimolar external calcium. A. punctulata spermatozoa don’t respond to speract (a peptide isolated from the jelly layer of Strongylocentrotus purpuratus eggs).

Resact is a 14-residue peptide with the sequence CVTGAPGCVGGGRL-NH2 (for Arbacia punctulata).

Function:
Stimulation of sperm respiration and motility within intracellular alkalinization, transient elevations of cAMP, cGMP and calcium levels in sperm cells, and transient activation and subsequent inactivation of the membrane form of guanylate cyclase.

Sperm swimming activation movements requires stimulation of the propulsion machinery of the sperm. First, contact with diffusible molecules contained in egg jelly initiates chemotaxis( Chemotaxis is the process in which a migrating or swimming cell moves toward a higher concentrate diffusuble or substrate-bound guidance molecule). Second step is, physio-chemicalcal contact with egg jellycoat. This causes the acrosome reaction, in which sperm head’s calcium concentration is increased. 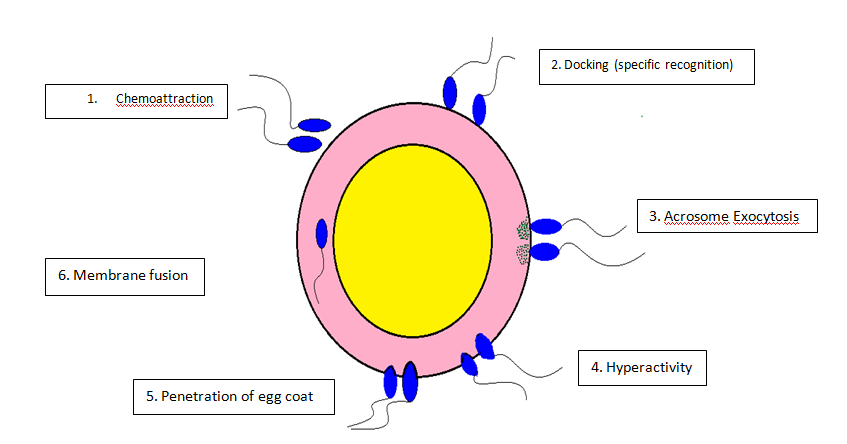 The RESACT( small peptide) acts as a chemoattractant for sea urchin sperm. When the surface area(receptors) of the sperm bind with RESACT, a signal transduction cascade involving cyclic GMP (cGMP) is set in motion, triggering faster sperm swimming. In this movie, inactive RESACT is added to a field of sperm. A flash of light causes photolytic activation of the RESACT, resulting in rapid movement of the sperm toward the source of the RESACT.

Events:
Sperm enter the resact gradient surrounding the egg and initiate turning through asymmetric flagellar waveforms. As a result, sperm re-orient towards the source of the gradient and are guided to the egg.

Resact activates a receptor guanylyl cyclase, which is the result in a rise in cGMP and inducing, by directly or indirectly,because the opening of a calcium (Ca) channel. Intracellular calcium level increased and then initiates turning behaviour. These events occur at lower resact concentrations and at earlier times .