Stomach is a muscular chamber or series of chambers that serve as a receiving site for recently ingested food, secreting digestive enzymes and lubricating mucus, and macerates food while fixing it with the gastric juices, the mucus and enzymes partially liquify solid foods before they are injected in to the small intestine. The stomach terminates at the pilorous which is the open from the stomach leading into deordinal, the opening is surrounded by a smooth muscles called piloric sphincter.

Structure of a vertebrate stomach:-
1. The stomach is straight when it 1st defrenciate in embryos and remain straight throughout life in some lower vertebrates.
2. Most often flexceres developed producing 'z' shaped or 'u' shaped stomach.
3. As a result the stomach may exhibite a concave border or lesser curvature and a convex border or greater carvature.
4. In mammals the greater carvature is the embryonic dorsal border connected to the coelomic roof by dorsal mesentry(mesogaster). 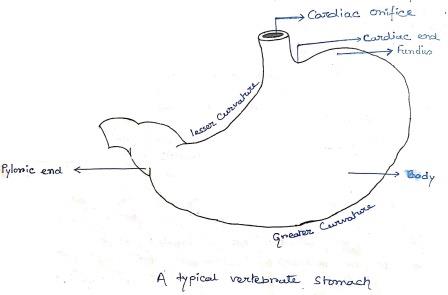 2. Mascular layer:- Consisting of both circular and longitudinal muscles.

3. Submucus layer:- The next layer of the stomach.

4. Mucus:- 3 principle cell types are found in this layer and they are.

1. In some mammals that consume grasses and grains, stomach is often divided into several distinct chambers.
2. The stomach of aruminant adapted for processing cellulose is an extreme example.
3. In ruminant stomach consisting of 4 separate chambers,
Rumen:- Rumen is the largest of the 4 where the food first enters from the esophagus.
Reticulum:- Reticulum is the most small chamber which is lined with many shallow pits.
Omasum:- The 3rd chamber is called the omasum. It is a small chamber with many wall developed longitudinal folds in its wall.
Abomasum:- The last chamber is the abomasum which is the glandular part of the stomach.
4. From the abomasum the partly digested food reaches the deodenum.
5. The inner lining of the 1st 3 chamber are like that of esophagus.
6. In canal omasum is lacking and the pouch like diverticular arise for the wall of the rumen and reticular. 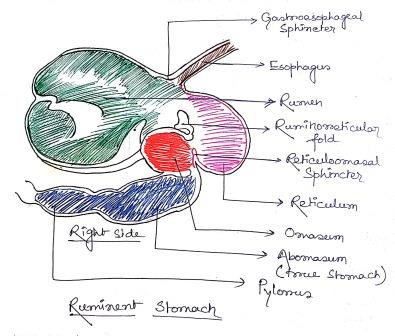 Passage of food the ruminant stomach:-
1. Grasses are taken into the mouth, many peulated and swallowed without processing.
2. Food passes down the esophagus and into the rumen.
3. In the rumen the food become mixed up and with the enzyme cellulose.
4. Cellulose is not produces by the rumen, but are secreted by the anaerobic bacteria and siliates, that leave in the rumen.
5. The muscular wall of the rument mix mucous enzyme and food.
6. At some intervals some contains pass from rumen to reticulum.
7. In the reticulum, the process of cellulose mantation continues and small boluses as curds of fermentation pulp are regargitated bact for further mastigation by the teeth.
8. The process of mastigatio, swallowing and regargitation may occur several times.
9. Eventually thoroughly mestigated food its swallowed and passed to the omasum which is a temporary holding site.
10. From omasum food is finally moved to the omasum which is the through grandidular stomach. Here the gastric enzymes are added to the food.
11. From abomasum food finally passed into the deodenum for further digestion and absorption. 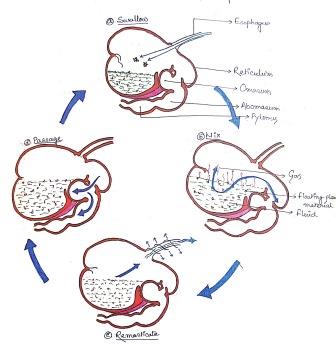 1. The cellulolytic bacteria are the most important in the initial branch down of the cellulose and the related complex carbohydrates.
2. The bacteria release a variety of acid, depending of the cellulose and the associate starch and sugar in the diet.
3. The acids (such as formic, acitic, butyric acid, lactic etc.) are absorbed directly from the rumen and enters the various metabolic pathways.
4. Considerable amount of CO2 and methane are produced by the fermentation.
5. The operation of the complicated fermentation chambers involves several specialization of the duct and is depended on the maintenance of a constant and suitable environment for the bacteria.
6. Lopious supply of saliva reach in bicarbonate. Occurs to maintain the fluid content of pH.
7. The fluid volume in the rumen is regulated by the passage of semifluid materials into the omasum.
8. Water electrolytes and more of this acids are absorbed in the omasum, before the concentrated residue of the fibrous food and the large number of microorganisms pass into the abomasum.
9. Ruminant do not dowell on diets that contain high level of tannins or regions because these compounds suppress microbial function in the rumen.
10. Plants with high silica contents breakdown so slowly that they impede the movement of food out of the rumen.

Foregut fermantors (Ruminants) swallow partly chewed food in to the rumen which is enormously enlarge. Here the food moistened and churned mixing thoroughly with the symbiotic microorganisms. Large particle of food float on top of the rumen fluid and first of the reticulum. Here cuds are formed which are then regargitated when the animal is at rest.
Foregut fermentation can be extremely efficient because the microorganisms attacks the plant materials before it release the small intestine where most absorption takes place.
The microorganism from the rumen are digested in the acid last chamber(abomasum) of the stomach and the materials that move into intestine contains all the substances the microorganisms have synthesized as well as the mechanism released from the plants by fermentation.
An additional advantage of foregut fermentation is a role microorganisms in the rumen play in chemical compounds that would be harmful to a vertebrates.