An insect uses its digestive system to extract nutrients and other substances from the food it consumes most of this food is ingested in the form of macromolecules and other complex substances(such as proteins, polysaccharides, fats and nucleic acids) which must be broken down by catabolic reactions into smaller molecules(amino acids, simple sugars) before being used by cells of the body for energy, growth or reproduction. This breakdown process is known as digestion. The insect digestive system is a closed system, with one long enclosed coiled tube called the alimentary canal which runs lengthwise through the body. The alimentary canal only allows food to enter the mouth, and then gets processed as it travels toward the anus. The insect alimentary canal has specific sections for grinding and food storage, enzyme production and nutrient absorption. Sphincters control the food and fluid movement between three regions. The three regions include the foregut, midgut and hindgut. 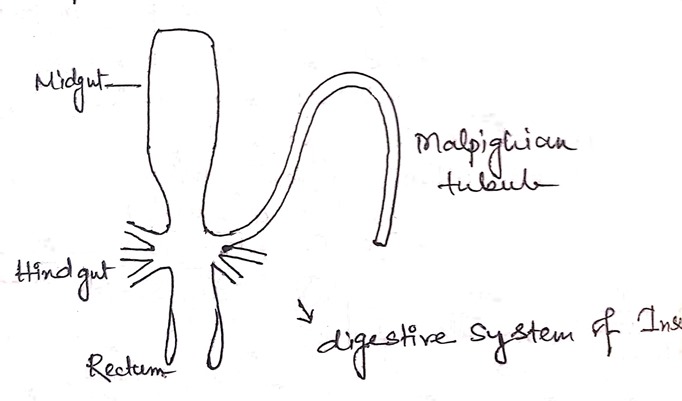 Midgut:- Digestive enzymes in this region are produced and secreted into the lumen and here nutrients are absorbed into the insect's body. Food os enveloped by this part of the gut as it arrives from the foregut by the peritrophic membrane which is a mucopolysaccharide layer. Secreted from the midgut's epithelial cells. It is thought that this membrane prevents food pathogens from contacting the epithelium and attacking the insects body. It's also acts as a filter allowing small molecules through, but preventing large molecules and particles of food from reaching the midgut cells. After the large substances are broken down into smaller ones, digestion conrequent nutrient absorption takes place at the surface of the epithelium. Microscopic projections from the midgut wall, called microvilli increase surface area and allow for maximum absorption of nutrients.