Many homopteran insects feed on low concentrate plant sap. Their digestive tract shows a complex system called the ‘filter chamber’ where the extra solute water is made to flow directly from the initial to the terminal part of the midgut and the proximal regions of the ‘malpighian tubules’. The filter chamber of Cicadella viridis shows the intra membrane particles presence on the whole surface of the microvilli and of basal membrane infolded cells. The inner surface of the membrane is covered with particles which are protruding into the cytoplasm. They correspond to the numerous number of the observed intra membrane particles on the P fracture face of the membrane. The outer membrane surface has a regular network which responds to observed on the E fracture face. SDS-PAGE analyses performed on the filter chamber’s membranes of C.viridis and Philaenus spumarious .in both cases 2 major components 25kDa and 75kDa, were found. These 2 major components showed for the filter chambers when they can’t be found in membranes which were isolating from the midgut. The membrane of filter chambers would be water –shunting complexes, which have structural and biochemical complexes which should be related to water permeability. 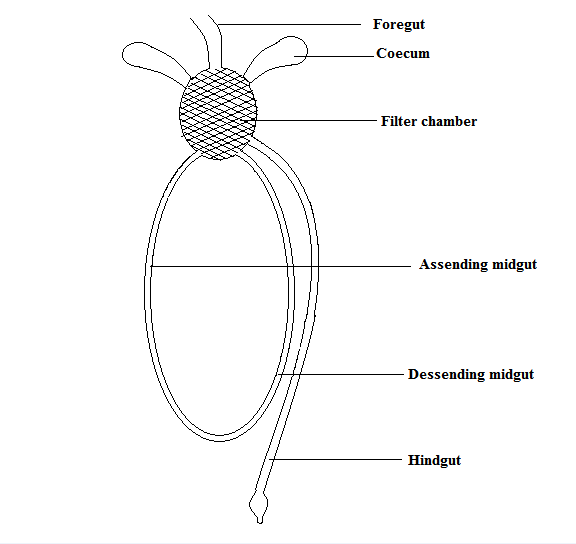 The role the filter chamber is very important in insect digestive system. Many homopteran insects like leaf-hoppers (Eurymela distinct and Eurymela fenestrata) feed on low concentrate plant sap of Eucalyptus spp. In the filter chamber osmotic pressure of both haemolymph and gut fluids involved in a filtration mechanism, passive osmosis. In this is process water is shunting rapidly from foregut to hindgut in the comparatively simple filter chamber. The main role of this process is the osmotic gradient which cause the system is mostly produced by the secretion of sodium (Na) and potassium (K) into both the Malpighian tubules and posterior midgut. The osmotic pressure is higher in all parts of the system.